Back in the Saddleback Since first opening its doors in 2015, innovation has been baked into Saddleback BBQ’s DNA. So the acclaimed REO Town-based eatery had a head start when the ongoing coronavirus pandemic forced businesses to find new ways to keep doors open.

The Lansing restaurant founded by Matt Gillett and Travis Stoliker, which has a second location in Okemos, has stayed busy despite disrupted dining routines by expanding innovative initiatives already underway, giving a green light to other new projects, and working to partner with and protect the community it serves.

“We never considered closing our doors,” said Drew Piotrowski, manager of special projects for the restaurant. “We always wanted to try to stay open. And we knew that was going to mean a lot of hard work. … It was just the ability to weather the storm and continuously pull new ideas out to make us relevant in the community so that people would continue to think about ordering with us.

“In a lot of ways, we were really fortunate because we have been in recent years leaning into things like curbside pickup. We’ve had our Pork & Go — that’s what we call it — for a few years now,” he continued. “We’ve had customers very used to using online ordering. So we saw the pandemic as something that exacerbated trends or made trends come quicker than we would have expected, but we were lucky enough to be in a position where we were kind of ready for these things.” 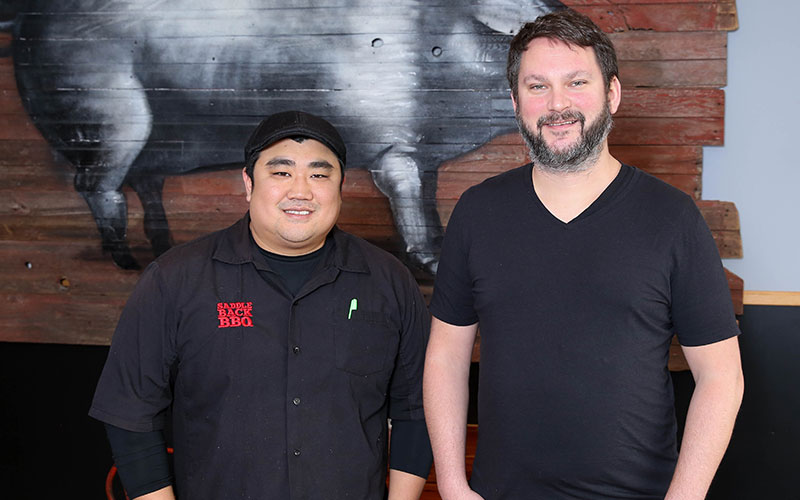 To make up for a notable loss in catering business, Gillett and Stoliker began to sell smokers, worked to expand sales of the restaurant’s branded barbecue sauces in local grocery stores and continued growth in selling special holiday dinner packages to go.

“Watching Travis and Matt and the way they operate, they are always tossing around new ideas and fundamental shifts to the way we do things — thinking outside of the box all the time,” Piotrowski said.

This past fall, the founders also opened up a so-called “ghost restaurant” called Tacos Burritos & Bowls within their two Saddleback locations.

“It’s a neat opportunity because it allows you to essentially start a brand-new menu very quickly and get this new food out to the community in a time when patrons were eating out more than they were used to. They were probably looking for a little bit of variety,” Piotrowski said. “One of the advantages of doing it is with ghost restaurants you tend to use ingredients already in-house. So we could do it without too much stress on the business and produce a new product for everyone.”

Saddleback also rallied its sizable customer base to help crowdfund the donation of around 1,000 meals to kids who had their school lunch programs shut down as well as fund more than 200 meals to first responders and frontline medical professionals.

“We have a pretty large following on social media, and that allows us to reach a decent number of people in the area,” said Piotrowski. “There are issues that people are interested in and concerned (with) but maybe don’t have the resources to start the objective. … We are fortunate enough to be in those shoes.”

Targets of Saddleback’s aid have included rival businesses. This fall, the eatery offered free advertising and marketing services to independent shops in need. Why help rivals? Because all businesses help support Greater Lansing’s economic foundation. The more that all shops are doing well, the stronger that foundation is.

“Before I ever worked at Saddleback, I would have thought it as a pretty crazy business idea. But working with two great co-owners, they’ve instilled in the company that a high tide raises all ships. So, we don’t really see it as rivals,” said Piotrowski. “We would really like for the whole Greater Lansing area to become known as a hot food destination. Anything we can do to keep everybody in the community thriving, it helps us additionally.”

Despite all the changes and innovation, the central focus has remained the same: making great food.

“Food is a powerful thing. It brings people together. Some of our best memories are around just eating food,” said Piotrowski, noting the recent Thanksgiving holiday that was impacted by the pandemic. “It’s a holiday all centered around food. As a restaurant, we’re really fortunate in that’s our product.”

Saddleback BBQ was modest when asked for advice to other businesspeople on how to pivot in tough times. But these insights could be observed from the actions of the business:

Always be innovating. Don’t wait for challenges to arise; seek opportunities, efficiencies and evolutionary changes now so you can hit the ground running when change is unavoidable.

Remember your fundamentals. Focus on what’s most important to customers and figure out ways to remain relevant and accessible to them.

Use clout instead of capital. Leverage your presence and stature to draw upon the resources from the community, and offer help to your community of customers, employees, suppliers and townspeople.

A high tide raises all ships. Help out business rivals when you can. Having many strong businesses helps create business and grows the consumer pie from which all can take a slice.