Quality Dairy Family of Employees is Credited for Sustained Success

Quality Dairy has been the familiar and friendly go-to of Greater Lansing neighborhoods for 85 years. Quality Dairy has been the familiar and friendly go-to of Greater Lansing neighborhoods for 85 years.

Founded in 1936 with the first store on Washington Avenue in Lansing, there are more than two-dozen QDs currently in operation throughout mid-Michigan, providing local residents the assurances of both convenience and, well … quality. It’s right there in the name.

Brothers Ken, Paul, Alan and Stanley Martin learned the ropes of the family business as youth cleaning office floors and working their way up through different departments. According to Ken Martin, the president and CEO of Quality Dairy, the lessons learned in those early days still apply no matter how high in the ranks you climb.

“You don’t ask someone to do what you won’t do or haven’t done yourself — and you don’t evaluate someone on how they’re doing unless you truly understand,” he said.

The young Martins were also taught that hiring employees was much like entering a marriage: It was a commitment to invest in and create long-term opportunities for employees.

“We’re committed to making sure we hold up our end of the bargain,” said Ken Martin, explaining that the company was broad enough that if a position didn’t work out for an employee in one role, chances were he or she could find a fit elsewhere.

With QD’s roots firmly planted in Lansing, the company has been a major employer over the years. Ken Martin also noted that there aren’t many degrees of separation within the family of employees that have made their way through the company’s doors over the years.

“I’ve had people tell me, ‘You’ve probably employed someone from every Lansing family at one point in time,’” he said.

Ken Martin’s indoctrination into his leadership role after the loss of his brother came just as the world was learning about COVID-19. But he soon learned the lessons engrained in the company’s moral compass were going to play a major role in keeping the doors open during the pandemic.

Investing thousands of dollars in training for each employee is one of the reasons QD has retained as much of its workforce as it has, while other businesses have lost so many team members. In fact, the convenience store industry overall has an extremely high turnover rate. Add in a pandemic, and those numbers dramatically increase. 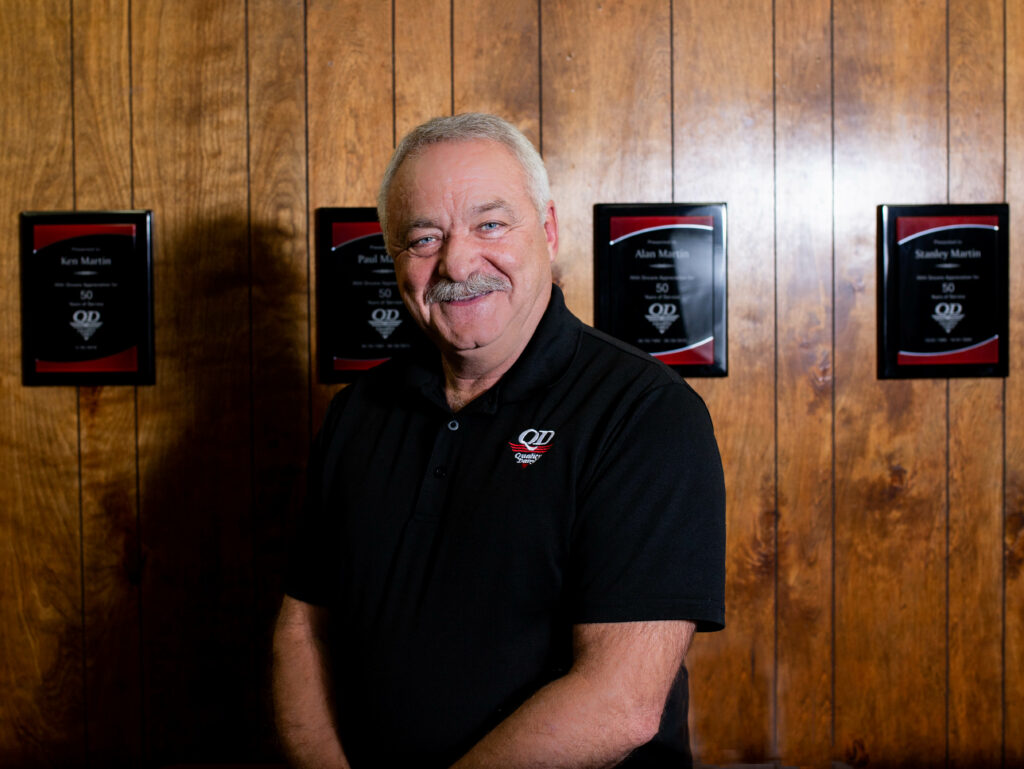 Making good hires, investing in them and keeping them safe on the job are among the Martin family’s mission; and when the going got tough, it was those employees who made the difference.

“I don’t know if anybody could have been prepared (for COVID),” Ken Martin said. But “our people showed up; that’s the story here. The employees of Quality Dairy didn’t skip a beat. They didn’t stay home; they didn’t ask why they had to come in. They simply showed up.”

He added that it was those employees who kept the company afloat when it just could have collapsed. However, QD wasn’t left unscathed.

“I have stores that should be open much later or even 24 hours, and I’m closing them early,” he said. “To say we’ve come out of it unblemished, we can’t say that. But we’re just so proud of how everyone has rolled their sleeves up and got it done.”

As for what the future holds, Ken Martin’s son, Jesse, and nephew, Joe (brother Alan Martin’s son), are current vice presidents and are being primed to step into ownership roles someday, a role Ken Martin referred to as the third shift rather than the third generation because of the deeply impactful journey ahead.

“We’re in that due-diligence phase right now,” Ken Martin said, “I know they’re up to the challenge.”

In the meantime, the company is celebrating its 85th year in business. Yet Ken Martin sees another milestone ahead.