Jack and Sue Davis: For the Love of Giving 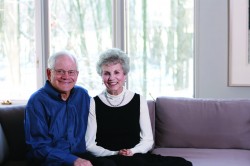 Jack & Sue Davis at their home/ Photo by Lisa Twenter
Love stories come in all shapes and sizes, some even the size of an entire city. Jack and Sue Davis share their love of giving and their love of Lansing.
Throughout the years, Jack and Sue have given time and support to numerous foundations and organization including the Boys and Girls Club, Legal Aid, Lansing School Board, the Community Foundation, Impression 5, Lansing Community College, Michigan State Summer Theater, Edith and Eli Broad Art Museum, Fenner Nature Conservatory and more.
Jack, a Lansing native, attended Eastern High School in his youth before traveling out of state to attend Wisconsin University. Sue, a Wisconsin native also attended the university, and as luck would have it that is where the two met, although fate took its time getting them together.
“We first had supper together for a sorority and fraternity dinner,” said Jack. “A year later she was a candidate for prom queen and I was master of ceremonies. She had a boyfriend at the time, but sure enough we had another supper and she didn’t have a boyfriend anymore,” he added with a smile.
The pair returned to the Lansing area to set down roots. Although they didn’t have a lot of money in the beginning, they found extra room in their budget to donate to causes that mattered to them. 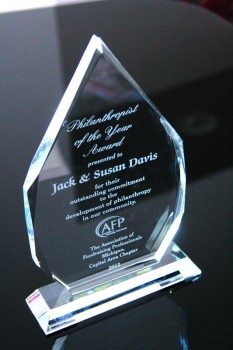 “When we first came to town we didn’t have a whole lot of money so we donated what we could here and there. But after a salary increase we were able to give away almost $1,000 a year, which was a lot of money at the time,” Jack said.
Each found issues they were passionate about and began to work toward building and bettering them through donations of funds and time served on committees. Jack spent time serving on boards while Sue took charge of issues that were close to her heart.
“I was very involved with the Opera Guild of Greater Lansing as well as being very committed to breast feeding. I became a lactation consultant and actually lead the movement to permit husbands to be allowed in the delivery room,” Sue said.
Jack found his place in bettering the community he has called home since his childhood. As an active member on many boards, Jack has helped countless organizations. To add to his list of his accomplishment is his most recent involvement with the Lansing Economic Area Partnership (LEAP) Board as Lansing Economic Board Chair. 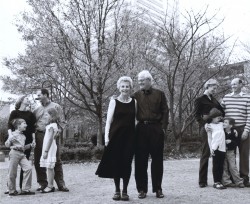 “I felt that since I grew up in Lansing I could observe the direction of the lives of various people I knew. Some did great and others had issues that were no fault of their own,” said Jack. “I could see the big picture and how things work for some and not for others and I wanted (to) support projects that would work for the majority.”
The couple was recently honored as Philanthropists of the Year in 2012 for helping to build a community they are proud to call home.
“I think we recognized the importance of helping to build a community, the kind of community we want to live in,” Jack said.
Part of creating that community took place far away from the community itself. The Davis’ have traveled all over the world to experience different cultures. Each of their travels revealed cultural gems they brought back to Lansing.
“Our level of travel to Europe, Asia and South America adds dramatically to the enrichment and understanding of life. You can see and experience quite a bit to expand your horizons,” Jack said. “We think you need to go places to bring diverse experiences to better your own community.”
Their heart is truly in the right place, right in the heart of Lansing. The pair believes it is their commitment and passion to bettering the mid-Michigan area that drives them to give so much.
“I think you have to develop a philosophy of life as to how much you want to focus on yourself. I think everyone has to focus on family at a certain point in their life but when you get beyond that, you have to put your time into something bigger,” Jack said. “I believe we create our own future. We create our own lifestyle and environment. As opposed to being subject to other people’s value system, we create our own. You have to decide what you feel is interesting and beneficial and try to deliver that, you have to work toward it.”
Jack and Sue have seen the city grow and transform in their years here. They know there is still a ways to go before it has reached its full potential, but they know it is heading in the right direction.
“We have come far. We have this sparkling new art museum at MSU, and the city is becoming more and more culturally diverse. The music department has grown and we have the perfect stage for world-class artists. The FRIB makes us the most influential nuclear physics center in the world,” Jack said. “Old town has become an interesting aspect of our community, while new little areas like Eaton Rapids, Mason and Charlotte are gaining their own personalities. It’s kind of fun to see that revolution because it is where I grew up. This community has transformed itself and still maintains a very welcome and friendly feeling. It is continuously evolving and transforming into this new cultural, economic and social hub.”
And with all the improvements they’ve seen, the couple only hopes that others in the community begin to get involved to keep things moving forward. The Davis’ encourage people to find an organization or fund that they are passionate about and get involved.
“You need to recognize the importance of helping to build a community — the kind of community you want to live in. Find a niche, find something you care about and support it in any way you can,” said Sue. “It can be financially, through donation of time, or whatever, as long as you try to make your contribution. It’s just amazing what we can do, what one family can do.”

There are still ways to gobble up the fun for the holiday
517 Staff
Digital, Lifestyle