…
coletteevangelista
How can you not trust a man slinging pizza out of the back of his Cadillac?
Mobile food is where it is at. Our local Trailer Park’d and the Purple Carrot food truck have found their success and their look. Trailer Park’d has its rustic truck hawking smoky meat and fresh and lovely local produce and products. The Purple Carrot has its cutesy and distinctive purple vehicle, again with inventive fresh and local food. So, how great is it that we now have a “pop-up” pizza joint being pulled behind a Caddy? Lansing, let me introduce you to Detroit Frankie’s Wood Fired Brick Oven Pizza.
Detroit Frankie’s is a brick oven gourmet pizza joint in a parking lot. That’s right. Brick oven pizza, on the corner of Oakland and Cedar Streets near downtown Lansing. Editor Emily had been hearing raves about the product, and the man behind it, so we decided what better place to lunch than out of doors. And we got lucky, it was mild out, the sun was shining and the pizza was great.
We pull up to the “pop up” pizza joint on what happened to be opening day for the Detroit Tigers. Detroit Frankie and some cronies were enjoying the season opener over their car stereos. They were gregarious and fun, like Frankie himself. Solid and friendly, Frankie is a man who obviously enjoys what he does. As one would assume, setting up shop in a parking lot does not lend itself to many bells and whistles. One advantage that Detroit Frankie’s has is that there are actual picnic tables to be had. 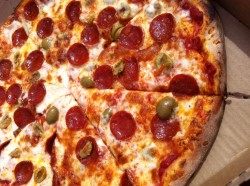 Most importantly, that brick oven — a culinary work of art — does its job. So what separates Detroit Frankie’s from other pizza places in the area, besides the fact that there is no roof? Let us start with the crust. It was both chewy and tender and just the right amount of thin. As your slice disappears and you approach the crust (which does happen to be hand-tossed) it gets more complex for some reason, with a deeper flavor. Known to some as only the “pizza bones,” Frankie’s crust could hold its own. There was plenty of cheese, and although the place does lack a walk-in, Frankie’s offered a great variety of fresh toppings including classics like pepperoni, onions, sausage and more. Perhaps the most unique toppings were Feta cheese and artichokes. Sticking with the idea of keeping it simple, we ourselves kept it simple with a pepperoni and green olive pie.
And we can’t forget the all-important sauce. Frankie’s sauce was special in and of itself. Some pizza sauces can be deep and spicy. Detroit Frankie’s is more vibrant. The tomato comes first and is bright and simple. It really lets the crust sing.
I’m not sure whether or not I should share this with readers, but the truth is, we ate the entire pizza. It was just That Good.
I am pretty sure that we talk about pizza 75 percent of the time in this column. But why wouldn’t we? Pizza rocks. Appropriately, so does Detroit Frankie’s. It’s baked by a bunch of rocks (ok bricks, but still). Head out and find Frankie. It is a fun and satisfying way to get your pizza fix.