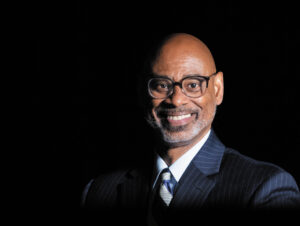 Andrew Wells’ answer started off strong before he realized the full emotional weight of his response.

Then his voice caught in his throat, and he paused and offered an unnecessary apology.

What are you going to miss the most?

It was less than two weeks before Wells would exit the office where he had worked at East Lansing High School for the past five years and say goodbye to the school district he called home for his entire 34-year professional career. There were wide-open and unwritten opportunities that awaited him in retirement. Yet there was so much more he was leaving behind — lives changed, lives mentored, lives molded and improved.

There will be a first day of classes at East Lansing High School for the 2022-2023 school year; however, there will also be a void left by the departure of a man who made a profound difference for students, staff and parents as the school’s principal since 2017.

“Mr. Wells has been a staple in the East Lansing Public Schools community for over 30 years. He has touched the lives of thousands of students and families throughout his tenure in the district,” said Superintendent Dori Leyko. “Mr. Wells’ positivity, wisdom and love for students will be missed by all who knew him. We are so fortunate to have had such an impactful leader in the district for so many years and wish him the best in his well-deserved retirement.” 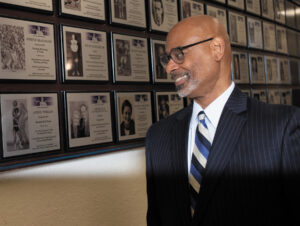 Wells’ ties to the school district extend beyond his professional tenure. He attended the former Hannah Middle School in the district and can also count himself among the vast ranks of East Lansing High School graduates.

Wells always had an interest in working with people, and his father, a teacher, inspired him to consider the educational realm as a way to exert a positive impact and influence on others. Yet Wells’ path to the administrative side of education was far from traditional in that it didn’t pass through a classroom. However, if he was never a teacher, he was practically everything else.

“I actually started in the district as a lunch monitor, right after I graduated from Michigan State University, just to be around kids and to kind of be a part of the fabric of a middle school and be able to support students,” Wells said. “I was a paraprofessional in the district, a coach for high school boys’ and girls’ basketball and track. I was a community liaison where I served the capacity of working with special-needs kids, helping them navigate school. I was also an equity officer in the district at one point.

“The opportunity to be a part of the educational system and, through coaching and working with kids, being a positive influence in their lives was always something that I enjoyed doing,” he added. “I feel like it was my calling. We all have things that we feel comfortable with. I think my comfort is connected to the ability to help people be as successful as they can in life. I’ve never been a teacher, but I always say that coaching is parallel to teaching because you use some of the same methods that you do in that arena as you do in a classroom setting.” 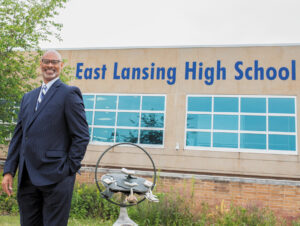 “I also wanted to create a sense of family,” Wells continued. “When I took over the reins, I met with almost every individual teacher one-on-one to gain an understanding of the culture of the school and the mindset and capture common themes. From there I was able to build a collective vision for the school, and one thing that I really felt strongly about was establishing a family-like atmosphere in the school. Our mantra nowadays is still East Lansing family or EL family. East Lansing family strong. All of those things make a big difference and give a sense of pride.”

Being in the same hallways where he once stood as a student brought both a familiarity and a newness.

The pandemic also caused shifts in the way education and communication was delivered. Plus, there were the obvious changes in technology since he was a student, which gives today’s students an educational advantage but is also a bit of a double-edged sword.

“The difference is now with social media being a part of everybody’s life, it creates obstacles and sometimes challenges because students today have technology at their fingertips,” Wells said. “I had to learn how to problem-solve face to face. Now people problem-solve on a social media platform, and they don’t have that face-to-face encounter. Therefore, it creates a divide in building relationships with people. … I think it’s a different time; but, then again, when you think about high schoolers, we’re also thinking about an age group anywhere from 14 to 18 years old. You’re dealing with students who are very inquisitive about life, some students who feel like they’re kind of floundering and trying to find their way. I think that was the same way when I was in high school.”

Wells struggled to distill his years in East Lansing into a single highlight. There have been just too many. Instead, he mentioned a personal summit as well as a broader achievement. For the former, serving as an elementary principal for his son and daughter was a special moment — as was being able to hand his son a high school diploma as his son walked across the commencement stage.

“The other thing has been to be a part of something that I believe is just simply great. East Lansing High School is noted as one of the best high schools in the state of Michigan. I’ve been able to work with some very fine educators who give their hearts and souls to educating students every single day,” Wells said. “That’s a tremendous highlight.”

That commitment and passion to be a part of something bigger, greater and more meaningful may ultimately be Wells’ true legacy in the EL family.

“I hope I’m remembered as a person who truly believes in people and that I want everyone in the school to experience success in whatever their endeavors might be. I want them to know that I believe in bringing people together and being a part of something very special: the East Lansing family,” Well said. “I want that East Lansing family to carry on and to continue to improve and be the shining stars in this community.

“I love East Lansing. I love East Lansing schools, and this has been a great journey. I wouldn’t trade it for anything,” he added. “I told the kids in my graduation speech this year that my goal when I was growing up was to be an NBA basketball player. I encouraged them to set goals too; but I said, ‘Remember, your goals might change. Your goals do change from time to time.’ My goal changed. And I realized that my calling was to give back to my community. And I said to them, ‘Being a part of your life is my NBA.’ That’s the way I view it.”