Even in the Fight of her Life, Selflessness Wins Out Those who know her have always recognized Jaimie Hutchison as a giving person. The kind soul who continuously thought of others and would never put herself first in line.

So, for those who know her best, husband Wayne and daughter Haiden, it didn’t come as a surprise when Jaimie’s selflessness could not be suppressed even as she battled for her life.

“During the pandemic, I did not get a mammogram. I put off a lot of my doctor’s appointments, like a lot of people did,” said Jaimie, who works as the director of the WorkLife Office at Michigan State University. “In March I started to get caught back up on all my appointments. They called me May 3 and said, ‘You’ve tested positive for breast cancer.’ Ever since it’s been a bit of a whirlwind.”

After completing chemotherapy and undergoing surgery in October, Jaimie’s post-surgery pathology came back as cancer-free. However, before her surgery in the fall, Jaimie and her family wanted to thank the ranks of medical personnel who were working every day to bring her back to health.

“These are the people that are standing by me as I fight for my life. They see me not at my best and still treat me kindly with compassion and empathy,” Jaimie said. “They’ve been there when I’ve had a panic attack, when I’ve had huge anxiety. There was one time I was sobbing for three hours through my infusion. They are steady and strong. You get to know the lab techs, the check-in folks — it’s like my second home because I’m there all the time.”

The Hutchisons began organizing a baking event with the help of members of Haiden’s Girl Scout troop, which Jaimie leads. Over the course of a day, the group baked over 100 cookies to deliver to the health care team overseeing Jaimie’s care at the Karmanos Cancer Institute on the McLaren Greater Lansing health care campus.

“Health care workers are some of the most caring, hardworking people — and they go underappreciated constantly,” Haiden said. “What we wanted to do was give them something to brighten their day, because work like that is hard and it takes a toll on mental health. We wanted to give them just a little pick-me-up.”

Wayne Hutchison took on the role of delivery driver, making the rounds at Karmanos to drop the cookies off to workers.

“The staff really doesn’t focus on their own emotions in front of patients; but when I dropped off the provisions, you could see that they were so taken that some of them actually let themselves give a little cry, a little emotion,” Wayne said. “They all mentioned their interactions with Jaimie and how fond they are of her. Every single individual on that team, to a person, tries to meet somebody where they are and engage them and try to help them. It’s just remarkable — and that goes for everyone, whether it’s a volunteer who’s unpaid or the senior oncology doctor.”

The reaction to a gesture of kindness and thanks was so impactful that the Hutchisons now plan on doing something special every quarter throughout Jaimie’s ongoing treatment. They’ve already held a GoFundMe campaign and garage sale to help raise funds for something in the works this month.

“They see us when we’re not at our best,” Jaimie said. “The one Monday I was in there, they said they had 50 people that day. That’s 50 people all fighting for their lives with different types of cancer. The workers don’t have an opportunity to have a bad day. They have to be on all day, every day with their patients. They have to be very accurate. They have to deliver life-saving medication. 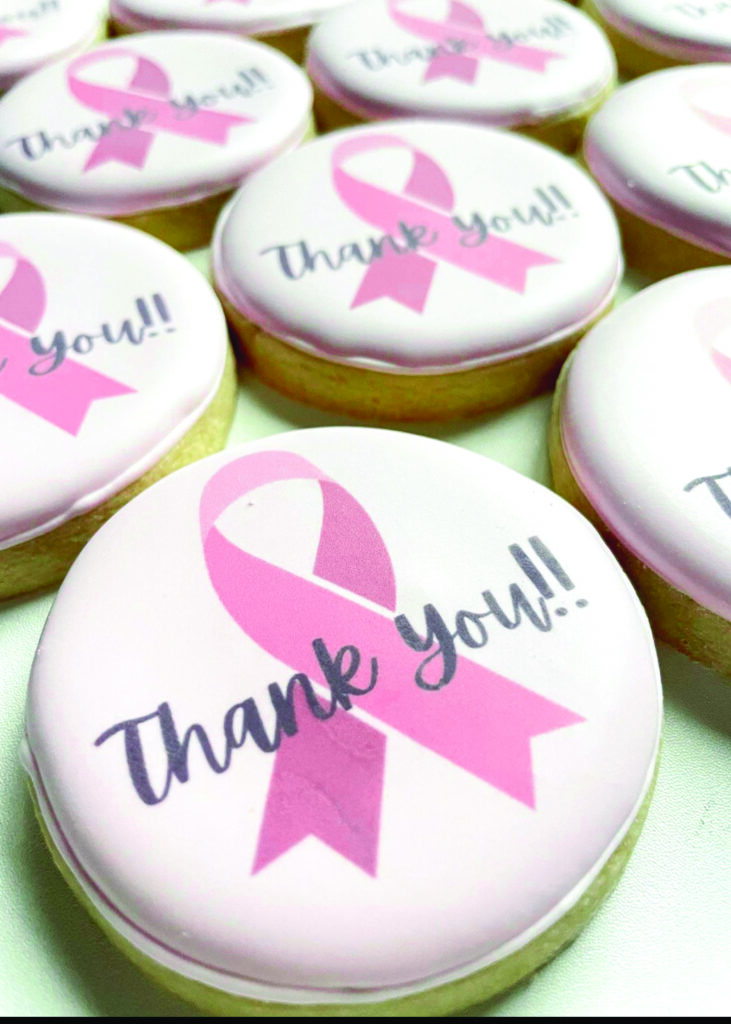 “They have to understand and ride the waves of the emotions we go through, from panic attacks to hours of sobbing to elation that it’s coming to an end,” she continued. “How I’ve seen them work together when I’ve had those bad moments — and how they’ll help each other and help their patients —  is just truly admirable. We learned through COVID that it’s not a job where you can work from home. It’s something where you have to be in-person.”

Although the Hutchisons never intentionally sought out attention or praise for their actions, there are two takeaways that Jaimie said she hopes people understand from their story. The first: Take care of yourself.

“Get those checkups. Thank God, I went and got it done,” she said. “I wish I had gone in earlier, but you can’t have any regrets. At least I did go in and caught it early. But there’s a lot of people like me that didn’t go get things taken care of during the pandemic, so I just want to remind people that those things are important.”

The second takeaway is: Take care of others.

“Health care workers have been there for all of us in this community. It’s really hard work, and the journey isn’t over for them. They’re having to continue that really hard work while things are still kind of a mess,” Jaimie said. “It’s not just them. There are so many other groups, like teachers or other people who may be in the background of other people’s lives, but they make such a big difference and continue to be empathetic and good at their jobs.”

For Wayne, that concept of planting seeds of compassion and being a community contributor is not an unfamiliar sentiment coming from his wife.

“One thing about caregiving and service that I think maybe some folks find intimidating is they think, ‘Well, my effort may not be good enough.’ There’s no such thing,” Wayne said. “If you take the time to try to help someone, there’s nothing you should censor yourself on with regards to that. Even now, as she fights to be healthy, she still makes time every single day to try to make a difference in the lives of other people. I know no one who is more selfless.”