Take M-99 out of Lansing and you will soon find yourself in the island oasis of historic Eaton Rapids.

With a picture-postcard downtown, the soothing sounds of gently churning water, and plenty of friendly faces and fantastic dining options, it’s an ideal late fall getaway for a lazy and relaxing sunny weekend afternoon.

Take M-99 out of Lansing and you will soon find yourself in the island oasis of historic Eaton Rapids. Sometimes referred to as Michigan’s Island City, the downtown business district is surrounded by the waters of the Grand River.

However, Eaton Rapids could have easily been called the “city of bridges.” At one time, Eaton Rapids was home to 14 bridges. Today, the city has six vehicle bridges and three footbridges.

Eaton Rapids became a popular health resort when mineral water was discovered in 1869. Advertised to have curative powers, thousands flocked to the city to receive treatment. The city’s mineral water was bottled and shipped across the nation.

In the 1880s, Eaton Rapids was a thriving community. The waterpower furnished by the Grand River ran grist, woolen and lumber mills in the city. The subterranean water tables were of superb mineral quality and gave rise to numerous artisan wells. Because of these wells, Eaton Rapids became known as the “Saratoga of the West” — a reference to a county in the eastern region of New York state also known for its mineral water. There were 16 daily trains that brought health seekers to Eaton Rapids for the magnetic mineral water and bathhouses. 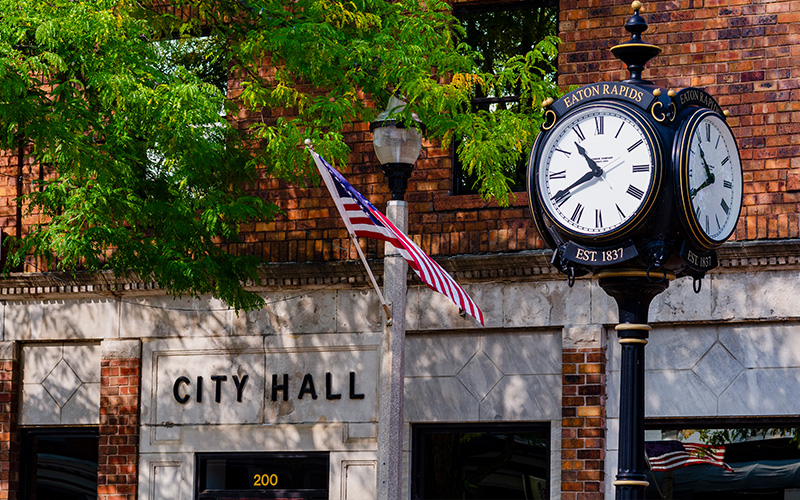