It just may be the most rock ’n’ roll statement ever uttered.

“When we first started out, it wasn’t uncommon for our bar tab to be more than we were getting paid as a band. When there are 11 people in the band, we might have gotten paid $300 for the night, but the bar tab was $400,” said Michael Fredericks.

Thirty years on, Global Village is still going strong — at least as far as the music goes. The bar tab nowadays is much more reasonable.

As the bass player and band manager, Fredericks is still bringing the noise, the funk and the fun to audiences throughout Greater Lansing on a regular basis when Global Village takes the stage. Formed in 1992 through the merging of several local bands and various musicians, the ranks of Global Village have waxed and waned over the decades with anywhere from seven to more than a dozen performers filling the typical bass-guitar-drums posts backed up by the bawdy brassiness of a horn section. This summer the popular band is marking a significant milestone of tapping toes and shaking tailfeathers with a sold-out 30th anniversary concert July 9 at The Studio at 414, 410 E. Michigan Ave. in downtown Lansing.

“That night is a once-in-a-lifetime show, and we’re going to bring back the majority of the band from 1992,” Fredericks said. “We’re going to go back and do a whole set of the music we used to do. Then we’ll do a second set from the version of Global Village that’s out now. There’s three original members of Global Village still: myself, our trombone player and our saxophone player. That band is going to play a set. The third set is going to be a combination of both groups. That will be up to 26 musicians on stage playing. That’s going to be cool.”

Aside from Fredericks, the current lineup of Global Village includes vocalist Augie Martinez, Bob Motycka/Doug Fritch on guitar, Austin Tipton/“Boone” Dottery on drums, Marcus Darden on saxophone, Dave Wullaert on trombone and Elise Berner on trumpet. Fredericks described the music as Motown, but it covers a much wider swath that includes R&B, funk, country, rap, hard rock, soft rock — pretty much anything that is going to get people up and moving. 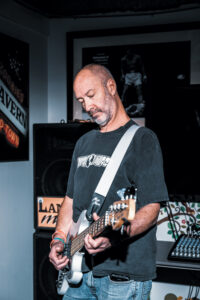 The band has opened for everyone from Smash Mouth and the Commodores to the Spinners and Smokey Robinson, but the leap to playing to large crowds is one that was born out of humble expectations.

The initial goal of Global Village seems a bit quaint now. After forming, the band set its sights on eventually building enough of a following to book a show at the Small Planet in East Lansing, one of the largest bars in the area during its heyday. It only took about three months before that goal was met.

“When we came out in 1992, the music scene was unbelievable in East Lansing — just amazing bands,” Fredericks said. “There was a lot of competition, and most of them were bands performing original music. In Global Village, we were a cover band. We just played music we liked to play. Well, people dance to what they know. The original bands were phenomenal, but people didn’t really know the music. But people packed the dance floor when we were out playing ‘Brick House,’ so we shot up pretty fast. When we moved to Saturday nights at the Small Planet, that was when we knew we were making it because that’s where the best area bands or touring bands were playing.”

That’s not to say Global Village never tried its hand at writing original tunes, yet that brief experiment nearly ended the band. Fredericks said it was a case of too many cooks in the kitchen, and the arguments it produced forced Global Village into a short hiatus. Members eventually came back together, playing a gig here and there to hang out before throwing themselves fully into reuniting as a covers-only band. They haven’t looked back since.

“It’s a relationship. It’s a 30-year band,” Fredericks said. “That’s longer than most marriages. Those guys are my brothers, and we’re there for each other; but at the same time, sometimes you’re going to fight like siblings. … We’ve all had those shows where we’ve not wanted to do it at some point. But once we got on stage and started playing together, the power of those songs and the way we work off each other, it just kind of gets you out of the funk. That’s what it is: We still love what we do, and you can really see that in the show.” 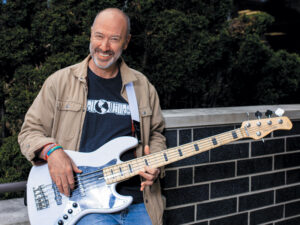 And hopefully also feel that from the show. Fredericks said the band has done its job if people are walking away happy at the end of the evening. That’s always been the secret.

“The best part of my job is laughing with the band members and watching the audience reaction to the music, how happy they get,” Fredericks added. “I really enjoy the time with the guys that I get, but we really love to entertain and see the faces as we entertain. We entertain from 5 years old to 95 years old, and we have been doing that for 30 years. We still get to do it to this day. We’re really blessed, in all honesty. There aren’t a lot of bands out there for 30 years that can still play when and what they want to play.”