One Small Act: Mother, Daughter Give the Gifts of Time and Kindness

The tales of large-scale initiatives of neighbors, communities and businesses rallying together to help those who were suffering were wid…

It’s difficult not to look back with a jaundiced eye at what can be perceived as the bitter harvest of 2020.

The scythe of the coronavirus pandemic swung low and swift reaping physical and financial devastation to individuals and families across the region; however, there was an alternate perspective to be viewed beyond the indiscriminate broad strokes. The year also brought a picture into focus of the hope and basic goodness in the marrow of humanity.

The tales of large-scale initiatives of neighbors, communities and businesses rallying together to help those who were suffering were widespread. Yet even more, it was the countless unseen and unsung small and individual efforts that staved off the tide of despair and helped to restore moments of contented comfort.

“They say it takes a village, and it really does. Nobody succeeds on their own,” said DeWitt resident Paula Wood. “When someone is struggling, if you can give them a hand up, you need to give them a hand up. It improves the community for everyone. If you can raise people up, it raises up the whole community. One small act can make a big difference.”

Since the spring, the 57-year-old retired special agent with the Internal Revenue Service has helped provide breaths of relief through such small acts at the food pantry of the Capital Area Salvation Army in Lansing. Not that volunteering is new to her. Whether it was in the PTA or coaching and being a team parent as a soccer mom, Paula was used to giving back. That example must have rubbed off, however, because she was recruited into this latest Salvation Army work by her daughter, Brooke Wood, a junior studying accounting at Michigan State University.

Brooke was already familiar with the nonprofit through her position as vice president of community service at MSU business fraternity Delta Sigma Pi. Brooke and Jon Curtis, volunteer coordinator for the Salvation Army, had previously partnered on several charitable endeavors through the fraternity.

“The pantry was at the beginning of this year when COVID hit. I would say March,” Brooke said. “Jon emailed me asking if I would be comfortable volunteering in the food pantry because a lot of their volunteers were in the age range that is very susceptible to COVID. When everything was getting shut down, a lot of these older people felt uncomfortable working there, so I started volunteering on the days I could.

“They were struggling with volunteers, and my mom just retired. I asked her if she would be able to volunteer a couple days a week whenever she could to help out,” Brooke added. “Since then, we both have been doing our weekly routine there.” 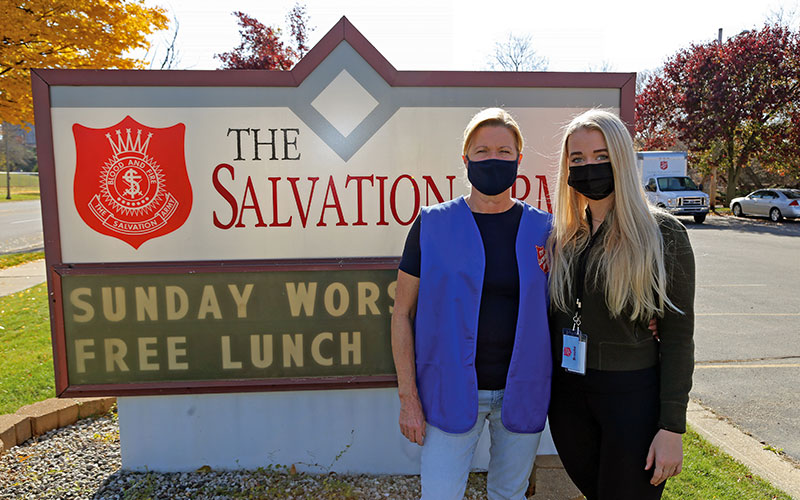 The good work throughout the region performed by the Salvation Army rests upon the shoulders of its volunteer staff from the community, Curtis said.

“A couple of years ago, I did the math for my own sake to see what it would be if we paid every volunteer the minimum wage,” he said. “It was more than what our budget is in general. We definitely could not do what we do without volunteers.”

Yet the threat of COVID-19 prompted many in the volunteer ranks to temporarily suspend their services. In the food pantry alone, Curtis said, only two or the original staff remained, which is why the efforts of new recruits such as Paula and Brooke Wood were a welcomed relief.

The work at the pantry has remained steady with some additional new caveats due to the coronavirus. Shelves still need to be stocked and orders still need to be checked, but the public currently isn’t allowed inside, so volunteers essentially now serve as personal shoppers to fill and bag the orders for the growing number of those in need from the community.

According to Brooke, the act of serving others brings lessons that every young adult should experience.

“I grew up watching my mom put in the extra time she had even though she worked full time and had two young kids at home,” Brooke said. “That’s what made me who I am. When people start young, it sticks with them and gives them an understanding that anyone could be in that position.”

Paula spent a good portion of her life understanding what it means to be in that position.

“I grew up I the ’70s, and it hasn’t changed any,” Paula said. “I had friends who had no food in their house. … But you’d look at them and you wouldn’t know that. It’s hard to put a face on hunger. It could be your neighbor, and you wouldn’t know it. I know the need exists; I’ve seen it firsthand. Even though I don’t know these people, I know people who have had to live that way. It’s rewarding because nobody should have to go hungry. Nobody.”