Two years since the idea began, the products from the business can be purchased at 135 stores in 30 states. It started, as most unexpected things do, with small and humble intentions.

A stay-at-home mom to four kids being schooled virtually during the early throes of the pandemic, Nicolette Skerratt had already organized several successful baked-goods fundraisers for Lily Bowen, a young girl the DeWitt community had rallied behind since she was diagnosed with the rare childhood cancer neuroblastoma at age 3. The bake sales eventually expanded to include bouquets of flowers and then yard signs — all sold contactless off the front porch of Skerratt’s home to assist with the expenses Bowen’s family was facing.

This new idea, however, was going to be something a bit different. Maybe even something Skerratt could parlay into a bit of a hobby to pass the days away until the curve flattened and life got back to normal.

“I saw a variation of the cocktail jar, and I thought it was something I could do,” she said. “I could probably do it cheaper and better, too. So, I gave it a try, added it to the fundraiser and started selling them from my front porch. It went over really well.”

The Mason jars contained various recipes of dehydrated fruit and cane sugar. The idea was to infuse the concoctions with alcohol, refrigerate and — presto — a new and unique twist on popular potent potables.

By Christmas 2020, Skerratt was being asked to bring her creations to a number of pop-ups at a local DeWitt boutique.

“I did the pop-up a handful of times in two weeks, and I sold out every single time,” Skerratt said. “I realized that there was a demand, and I had made so much money in those two weeks doing those pop-ups that I had to get licensed. By February 2021, I was fully licensed and had started a website. I still sold them locally from my porch, where people could come get them, but then I was able to start wholesaling them. From there, word of mouth just spread.” 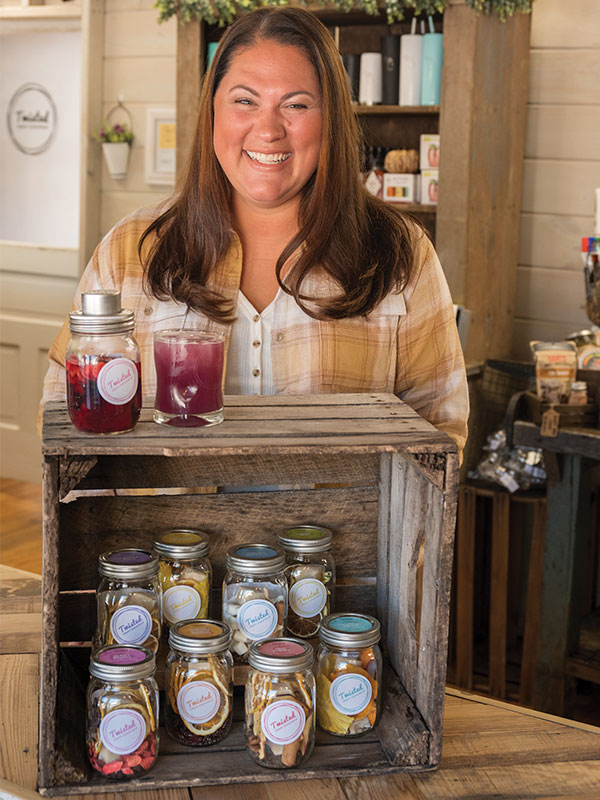 “It’s been shocking. I really had no idea this would happen,” Skerratt said. “It sounds crazy, but I had zero intention of starting a business. It just kind of fell in my lap after I saw the demand. I really wanted it to start as a hobby, but it quickly was made known to me that it wasn’t going to be a hobby because I was getting so many calls. That’s one of the reasons why I never really did any advertising. I didn’t want it to be forced growth; I wanted it to be organic growth — moms telling other moms or customers telling all their friends. I felt like that was the most genuine advertising you could get.”

Twisted Craft Cocktails offers 13 varieties of cocktails to choose from in several sizes, with the 16-ounce jars being the standard size. The business also sells jars of sangria, classic cocktails — such as an old fashioned or cosmopolitan — and cocktails flights in a series of 4-ounce jars for those who can’t decide. Once used, the sugar in the jars infuses into the dehydrated fruit, so each jar can be used more than one time, Skerratt noted.

“Our standard jar size is going to make eight to 10 cocktails,” she said.

In addition to the cocktails, the front retail space at Twisted Craft Cocktails also sells practically anything one would need to entertain — cutting boards, olive wood bowls and utensils, bread mixes, pasta, gourmet chocolates and popcorn, aprons, towels, salsas, jams, and more. Much of the merchandise comes from regional artisans and vendors.

Yet it’s the rear two-thirds of the business where the 20 employees of Twisted Craft Cocktails make it all come together. Beyond the register, it’s kind of like Willy Wonka’s factory — except for adults. Hundreds of filled and unfilled jars are neatly piled atop metal tables; 5-gallon, food-grade white buckets house various dried fruits; multiple rows of multiple business-grade dehydrators sit in a temperature-controlled room.

“We dehydrate all of our own ingredients. We get the fruit fresh, we slice it and we put it in our commercial dehydrators,” Skerratt said. “We also make our own organic cane sugar blocks. This is citrus-infused cane sugar that we put it into molds and dehydrate to get the moisture out. So, we cook it low and slow. Then we assemble the jars. People fill the jar with a liquor of their choice, and they stick it in the fridge for at least three days to infuse. Because we dehydrate everything and take the moisture out, it’s shelf-stable for a year. Once you add the alcohol, it can be in the fridge for up to 60 days.”

The best part of her job, according to Skerratt, is seeing people try a new experience with the product.

“They’re excited to try something new or give it as a gift and see the expression of someone else who is getting it. It’s just fun. It’s something different,” she said. “When I started this in the middle of the pandemic, people were just starting to come out of houses again and be in public again. When I was doing the pop-ups, it was great to see how excited people were to try it and just experience the pure joy of being able to do something normal again.”

Yet for all the success beyond expectations Skerratt has experienced with Twisted Craft Cocktails, perhaps the true dehydrated cherry on top of this story can be found where it began — with that young child the DeWitt community continues to rally behind and support.

While she is continuing treatment and remains under the watchful eyes of caring physicians to keep the cancer at bay, Lily Bowen is currently in remission, Skerratt said.

Now that’s something to raise a glass to.