Jeff Lazaros is working diligently on his dream of bringing baseball back to inner-city kids through Strikeout Baseball. The ol’ ball game is getting a new look in the Lansing area.

Jeff Lazaros is working diligently on his dream of bringing baseball back to inner-city kids through Strikeout Baseball. Strikeout is different from regular baseball, with smaller teams and just the infield to play on.

“We used to play it where I grew up down in Detroit,” said Lazaros. “It takes less space to play, and you don’t need to get 18 guys to get a game going.”

The stadium will be completely enclosed, with a wall along the back of the field replicating Jackson Field and a net covering the top of the diamond. The field itself will have lights and sound effects of a crowd and organ music to make it feel like a real major league game. Depending on where the ball hits along the wall or ceiling, certain calls are made for the play. With each team having about five players, it’ll be much easier for kids to get pickup games going.

“We really believe that down the road, what we’re creating is something that baseball will use and endorse for many years in the future,” said Lazaros. “So, this is really just the starting point of creating something cool and unique. And having it start here in Lansing is amazing.” 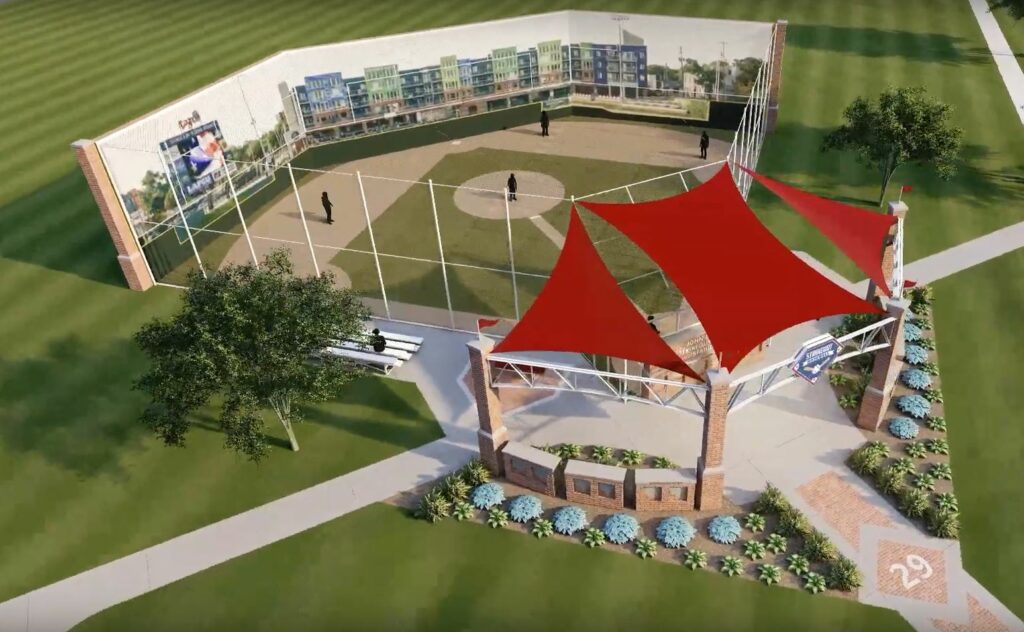 The stadium will be named after John Smoltz, an MLB All-Star who came from the Lansing area. Smoltz said that he is honored and very excited to see the stadium come to fruition.

“It’s going to be owned and operated by the city of Lansing. Basically, we’re doing the legwork to create, develop and construct this facility,” said Lazaros. “We’re trying to make it as easy as possible for kids to just buy a ball, pick up their bats and mitts, and just get out and play.”

They have been working on fundraising for the project and they are pending approval as a 501(c)(3) nonprofit.

“This is my dream,” said Lazaros. “I’ve been working for years to bring this together and, along with my advisory board, I’m proud to see it coming together. I want this to be a symbol for kids to follow their dreams, because they can achieve them. I grew up with very little, and I know what it’s like to be made fun of. And I really believe that the underlying message of what I’m doing is to give hope to young kids to always believe in themselves and, you know, to always put their best foot forward, to respect your elders and be a good person.”

For more details about the project or to contribute, visit strikeoutbaseballusa.org.