A day in the life of David Andrews and Monica Harris, Mid-Michigan’s Media Power Couple. Having served as the evening news anchor at WILX-TV for nearly 23 years and at WLNS-TV for 11 years prior to that, David Andrews has cemented his place as the face of Lansing news — the reliable and trusted figure who delivers the serious and sometimes tragic details of each day’s events with stoic authority and authenticity.

Yet, as it turns out, in his personal life Andrews is a lighthearted and good-natured goofball of monumental proportions.

Andrews uses his professional Facebook profile to bring laughter and joy to his followers by providing a peek into his off hours and home life through offbeat and humorous posts — typically with the complicity of his partner-in-crime wife, WFMK-FM morning drive-time host Monica Harris.

Whether it’s photos of Andrews setting his “honey do” list ablaze in the backyard firepit while Harris is on vacation or he and his wife celebrating National Ride the Wind Day, the couple fully embrace the adage that laughter is the cure for what ails you. Harris noted the juxtaposition of Andrews’ buttoned-down on-air persona with the spirted social media hijinks may have caught some of his fans a bit off guard.

“However, I think people are pleasantly surprised that I’m not as straight-laced as a I come across on TV,” Andrews added. “What you see in the different things we post on social media is really more the true me than the perception people might have when I’m doing the news.”

The initial postings started out as being work-driven. Because social media has become such a prominent part of people’s lives, Andrews and Harris are expected to use it in their work as a way to engage the audience. 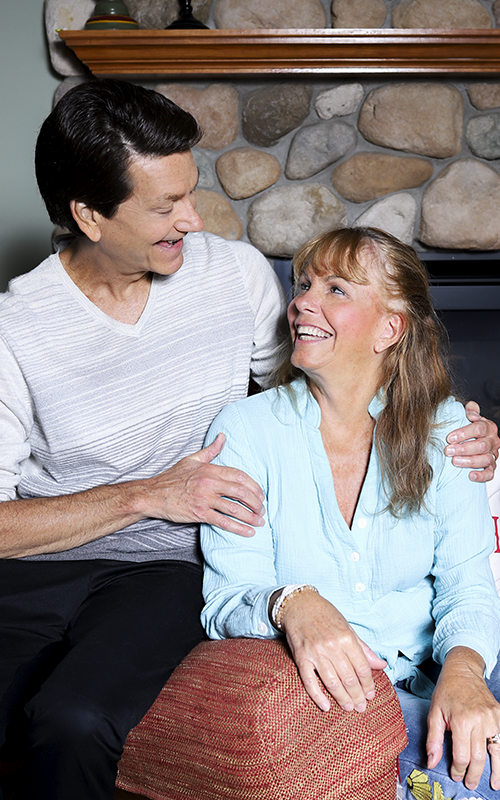 “I come home from work, I walk in the back door and there on the kitchen table is the camera and the tripod and the clicker,” Harris added. “I start backing up out the door and he says, ‘No, come here. I’ve got a great idea.’ We do have fun doing them.”

“It’s got to be there for us,” Harris said. “I can’t imagine what life would be like without a sense of humor.”

“It is truly the benefit that keeps our marriage together,” Andrews noted. “Especially in the media with all the tragic things that we deal with and all the heartbreak. If you don’t laugh, you’ll cry. Sometimes you have to look at the funny side of life to try and pick up your spirits and get through another day.”

Harris said her sense of humor is based in clean comedians such as Jim Gaffigan, whose observations point out the quirky twists in everyday life. Andrews said his can be traced back to wholesome comedy such as on “The Dick Van Dyke Show” — to which Harris joked that she pushes her husband over an ottoman every chance she gets.

But at a time where a national health crisis, civil unrest and extreme political divisiveness dominate the headlines, a bit of innocent slapstick is something people need right now, the couple noted.

“When we do these things, we stay away from anything controversial. People appreciate that,” Andrews said. “I can’t tell you how many times the comments have been, ‘Thank you for giving us something to laugh and smile about because of all the doom and gloom that is going on right now.’ That has been inspiring as well.”

“Every day we start out by thinking, ‘How can we lift people up and make them happier?’ It’s quite an easy thing to do, and it makes such as big difference,” Harris added. “And it’s fun when people start getting involved. David will get all these funny texts from people, and they all want to be a part of it. It has taken on a life of its own.”

The Oct. 21 ribbon-cutting marked the culmination of a years-long effort to make extension of the Coleman Road a real…
Mary Gajda
Digital, Lifestyle

A report by slotsource.com says Texas is the most haunted state in the country, with nearly 7,000 documented and repo…
517 Staff
Digital, Lifestyle