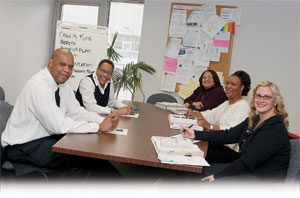 As Bangladeshi economics professor Muhammad Yunus and his Grameen Bank received the Nobel Peace Prize in 2006 for providing small loans (microfinancing) to the world’s poor, the Lansing Community Micro-Enterprise Fund (LCMF) celebrated 10 years of entrepreneurial education and will soon achieve a decade of lending as well.

“Our very first class was held in August 1996, and in July 2007, we will celebrate 10 years of lending,” said Denise Peek, executive director of the LCMF for the past seven years.

Microenterprises have five or fewer employees. Since 1997, the LCMF has disbursed 30 loans from $500 to $10,000, totaling $174,075, to 17 start-ups and 12 existing companies. In partnership with the Michigan-Small Business & Technology Development Center (SBTDC) at Lansing Community College, the LCMF provides training for those who are thinking of starting or expanding a micro-enterprise.

“We have a 12-week course and a 15-week course,” Peek explained. “The 12-week course is for individuals who think they might want to start a small business, but they’re not quite sure. The 15-week course is for those who know this is what they want to do. They’ve done some research, and now they’re at the stage where they really need to do a business plan. It’s really designed for people who have been in business for three or more years and really need some type of structure. We use a trademarked Nx Level curriculum, and it’s one of the best programs I’ve come across in a long time. It has the flexibility to allow me to structure the training based on the individuals within my community.”

“We’ve had 504 people enrolled and, of those, we have an 83 percent completion rate,” said Peek. “Our women’s enrollment is 56 percent and our minority population is at 71 percent. We have been having more men enroll, and we have increased our non-minority population. Our core group is low- to moderate-income individuals, mainly minority women, but we’ve increased in other areas.”

The cost of the courses is either $275 or $375, depending on income. The LCMF has also added a course on personal finance.

“Everything is based on personal credit,” Peek noted. “They think if you start a business and get a ‘dba,’ you can actually get credit lent under the business name. Well, it doesn’t work that way, so we have a six-week financial literacy program called ‘Credit When Credit Is Due.’ We cover information about credit and debt, and how it works and how it doesn’t. It teaches individuals how not to live from paycheck to paycheck. I’ve had one couple who took it about a year ago and bought a house within nine months of taking it.”

Julie Kelly, a former welfare recipient who learned about cleaning up her credit record through the LCMF, now owns Julie’s Café in Bellevue, employing herself and two other people.

“I’d worked in the restaurant field for over 20 years and figured I might as well do this myself,” said Kelly. “I had an opportunity, and I just learned such wonderful things from Denise. She always had faith in me. I was a single mother with two kids, and I wanted to better myself. Through that program, she helped me do that. By the time I opened the restaurant, I wasn’t intimidated.”

Another set of successful clients were Craig and Tammy Harris, owners of Turkeyman, Inc.

“With the $10,000 they borrowed from the Micro-enterprise Fund, they were able to move three times, out of their home onto River Street to a small café on Michigan Avenue, and now they have the nice huge commercial kitchen on West Saginaw,” said Peek. “That $10,000 allowed them to expand, and they’re still in business.”

Bo Garcia, regional director for the SBTDC, noted that micro-enterprises have had great economic impact on their local communities.

The SBTDC has its own entrepreneurial programs and works with Peek’s organization as well.

“We refer clients to each other all the time,” added Peek. “I might have a client that really needs to have a business plan done in less than 12 to 15 weeks. It can be very intense, like somebody looking at purchasing a small manufacturing firm, which is Bo’s area of expertise. He has a different set of resources, whereas he might get clients who are not sure what they want to do in their small business, so he refers them to me. Then I sit down to talk with them and let them know about our courses. He and his staff have also been speakers at our training.”

The LCMF consists of Peek and a volunteer board. Peek would like to expand the program to include bigger companies that also need help.

“There is a group of entrepreneurs who need to borrow between $15,000 and $30,000 on a consistent basis, and there are no resources for them,” she explained. “We can become a [Small Business Administration] micro-loan lender, but we have to be able to service at least three entire counties because that’s a lot of money to be lending. I’m looking at expanding in Ingham County, and I’d be more than happy to talk to individuals from Eaton and Clinton counties. That’s a segment of the entrepreneurial market that isn’t being served and the [LCMF] would like to serve that group.”

As more displaced workers enroll in her programs, Peek noted that they often have not considered consulting opportunities with their former employers.

“They do not realize they have enough experience to become consultants for GM on some of those machines and processes they’ve been working on for years,” she said. “They don’t know how to turn that knowledge into a business. By writing a business plan and taking a couple of courses at LCC in business management, you can actually have a consulting firm.”

In the tri-county area in 2003 there were 27,792 microenterprises without employees and 4,879 with one to four employees, for a total of 32,671, according to the U.S. Census Bureau and the U.S. Department of Commerce.

“The great thing about the Micro-enterprise Fund is to develop credit training and lending,” Peek stated. “Yes, it is very high risk, but it’s a risk worth taking, because when you have the ability to affect someone’s life in a positive way, they are more likely to succeed when someone takes a chance on them.”

With a vaccine on the way and changes coming daily, it’s important to stay up to date with facts, especially changes …
517 Staff
Local News,